Western Animation / I Lost My Body 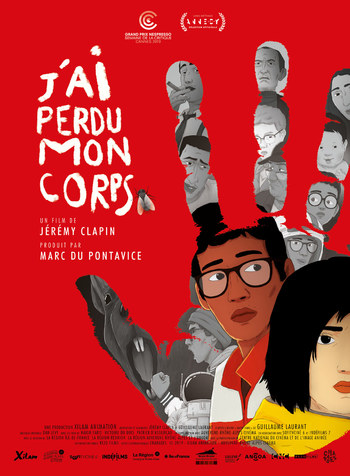 I Lost My Body (French: J'ai perdu mon corps) is a 2019 French animated film directed by Jérémy Clapin. It is based on the novel Happy Hand by Guillaume Laurant.

In a French hospital, a hand comes to life. It moves and stealthily navigates though Paris, facing mundane dangers such as being eaten by rats, as it tries to return to its former owner, a young Moroccan-French man named Naoufel. The hand's dangerous yet dreamy journey is interspersed with flashbacks of Naoufel's life, from his happy childhood in Morocco to his young adulthood in France after the death of his parents in an accident and his odd romance of sorts with a young librarian named Gabrielle.

I Lost My Body provides examples of: