Film / Identity Theft of a Cheerleader 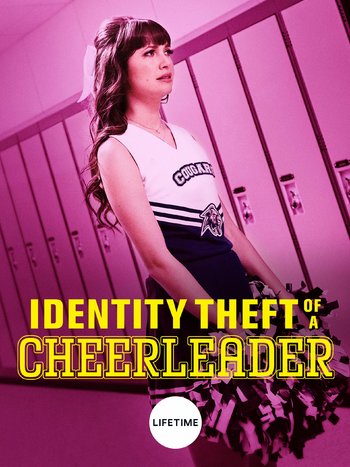 When Vicky shouts "Go Cougars!", she certainly practices what she preaches.
Advertisement:

Identity Theft of a Cheerleader is a 2019 Lifetime Movie of the Week Teen Drama Thriller, written by Barbara Kymlicka and directed by Christie Will Wolf. It was part of the network's Cheer! Rally! Kill! event, with five original cheerleader-themed thrillers.

Vicky (Maiara Walsh) feels like a failure in life as she turns 30. She works a dead-end retail job, her boyfriend Darren (Matty Finochio) is a deadbeat compulsive gambler, and nothing she does is ever good enough for her bitchy mother Angie (Gail O'Grady). Laid off from her job, she first contemplates going to night school, but then she happens to find the old school ID card of Caitlyn, her high school-aged co-worker who dropped out of school, on the floor. Vicky's high school years were humiliating; she was an unpopular geek who dropped out after failing to make the cheer squad. Upon finding the card, Vicky concocts a scheme: she'll register for high school, pose as Caitlyn, become cheerleading captain (to show her mom she can achieve something) and generally have the perfect high school experience she was denied when she was younger. All goes well until her classmate Heather (Karis Cameron) starts suspecting that "Caitlyn" isn't who she claims to be.

Identity Theft of a Cheerleader contains examples of: