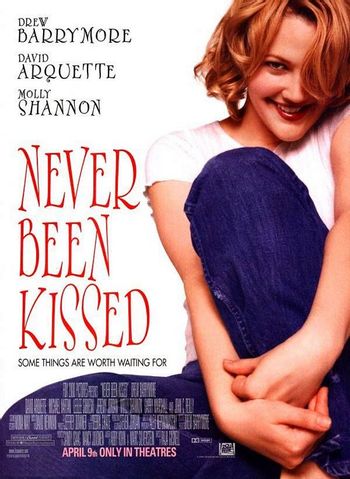 Never Been Kissed is a 1999 Romantic Comedy film starring Drew Barrymore, David Arquette, Michael Vartan, Molly Shannon, and John C. Reilly, directed by Raja Gosnell, and produced by Barrymore's production company Flower Films. This is also one of the first movies of Jessica Alba and James Franco as part of the popular kid posse.

Josie Geller (Barrymore) is a 25-year-old journalist assigned to report undercover as a high school student to help parents become more aware of their children's lives. Back when she really was a high school student, Josie was a nerd with bad personal hygiene; as a result she was very unpopular. Her initial efforts to fit in at school are about as successful as they were in her teens, but with the help of her brother Rob (Arquette), Josie becomes more popular. She also finds herself falling for one of her teachers, who believes she's 17 years old and is disturbed by his own attraction to her. When he learns the truth, it becomes a question of whether he can forgive her for the deception or if that will keep them from being together.