Film / Never Back Down 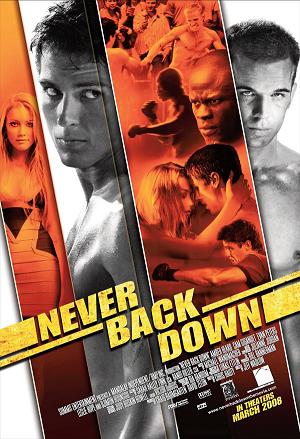 "If you want to be the best, you have to take down the best."
Advertisement:

Never Back Down is a 2008 martial arts film directed by Jeff Wadlow and starring Sean Faris, Amber Heard, Cam Gigandet, and Djimon Hounsou.

Jake Tyler is your average boy from Iowa. Except that his dad is dead and as a result, Jake is angry all the time and expends his excess energy by beating the crap out of anyone who makes the slightest comment involving his lack of ongoing male adult influence. His kid brother is a budding tennis star who gets a scholarship to a good tennis school in Florida. As Jake is in severe trouble at home in Iowa, this is a good move for all involved. Once he arrives in Florida, he finds something new and unexpected: Mixed Martial Arts. Seemingly the entire school is involved in an unofficial MMA club. Yes, the whole school, even the ladies, has a singular obsession with MMA.

As things progress, Jake gets beaten senseless by Ryan McCarthy, the school's resident Jerkass, in a fight that was unwanted by Jake and instigated by Ryan's innate ability to sense his opponent's Berserk Button and proceed to mash it repeatedly. This fight is Jake's first lesson in MMA. His friend then gets him into formal MMA training, where Jean Roqua teaches Jake how to defeat any opponent. Many matches later, Jake ends up facing Ryan in a one-on-one fight to determine, once and for all, who the better fighter is.

The film was followed by two sequels, (Never Back Down 2: The Beatdown and Never Back Down: No Surrender), both directed by and starring Michael Jai White as ex-MMA phenom and martial arts master, Case Walker.