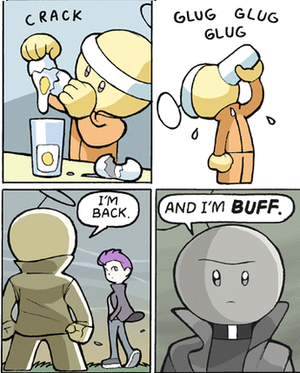 Buff with salmonella.
"When I was a lad, I ate four dozen eggs
Every morning to help me get large!
And now that I'm grown, I eat five dozen eggs
So I'm roughly the size of a barge!"
— Gaston, Beauty and the Beast
Advertisement:

When a character is training to get stronger, his routine will almost always involve drinking raw eggs at some point. It was originally believed that raw eggs have more protein than cooked eggs, and it makes the character look tough and determined since it takes a real hardass to down something so unpalatable.

It was later learned that cooking the egg fuses its protein strands together and increases the amount of protein that will be digested compared to a raw egg. Consuming raw eggs also puts you at risk of salmonella poisoning (unless the eggs are pasteurized ahead of time), turning this into a Dead Horse Trope. Consequently, a common modern version is to have the character down the eggs and then immediately puke them up.

Note that some dishes are prepared by adding a raw egg to a hot dish just before serving, such as the popular Japanese breakfast, tamago kake gohan, which is egg rice. That is not this trope.

Made famous by Rocky, so this trope shows up frequently in Training Montages set to "Gonna Fly Now" or "Eye of the Tiger." See also Hideous Hangover Cure. See also Prefers Raw Meat, which is often inspired by the same assumption behind this trope (i.e. that uncooked food has more nutritional value).