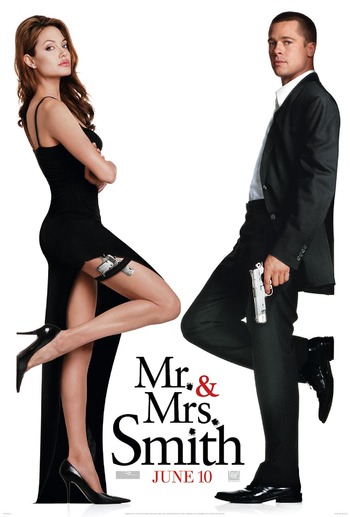 "Why is it you think we failed? Because we were leading separate lives? Or was it all the lying that did us in?"
— Jane Smith
Advertisement:

Mr. & Mrs. Smith is a 2005 action-comedy film, directed by Doug Liman and starring Brad Pitt and Angelina Jolie. The eponymous Smiths are a couple who have been married for five (or six) years. After meeting each other while vacationing in Colombia, the two married and settled down to a quiet, white-collar life in Suburbia, but now they find the magic is fading and wonder if their marriage is going to last.

In reality, both of them are being smothered by the weight of their double lives — as secret agents and occasional killers for hire. All the fire seems to have gone out of their relationship and they are seeking marriage counselling.

One day, John Smith (Pitt) is ordered to take out a hit on a man called "The Tank". But his wife Jane (Jolie), who works for a rival agency, is also sent to take down "The Tank". Upon discovering each other's identities, the Smiths are told by their employers to take each other out, leading to results that range from your standard Slap-Slap-Kiss all the way up to no-holds-barred Domestic Abuse. Things are not as they seem, though. When John and Jane both come under attack by their former employers, they realise that if they are going to live (and keep their marriage intact), they're going to have to work together both as assassins and as a couple.

Not to be confused with the 1941 screwball comedy directed by Alfred Hitchcock (where a couple who have been married three years find out that they aren't really married) or the 1996 TV series (where two spies are forced to work together under the codenames Mr. and Mrs. Smith).