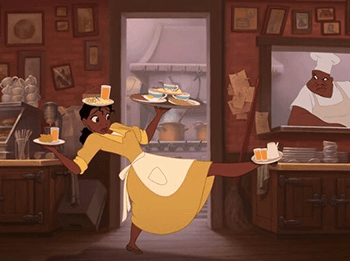 Tiana could probably fit a few more dishes in her teeth.
"Blunt the knives, bend the forks
Smash the bottles and burn the corks
Chip the glasses and crack the plates
That's what Bilbo Baggins hates!"
— The Hobbit: An Unexpected Journey
Advertisement:

The animated and/or comedy trope wherein a character has to pretty much dash madly around a room catching stacks of falling breakable dishes/plates/cups/mugs/lightbulbs/vases before they hit the floor and smash into a million pieces.

The most common variations of "what happens next" involve someone or something disturbing the rescuer of dishes, knocking into or startling them, and:

There's also a Discredited Trope variation of the Dish Dash — when someone is showing off their skills at keeping dishes balanced atop spinning sticks. It used to be popular in Variety Show TV, this is rarely seen in modern TV (anything after the 1970s).

This trope frequently is accompanied by the Standard Snippet "Sabre Dance" by Khachaturian, as a Mood Motif for how frantically the character is dashing around to save all the breakables.

Not to be confused with Diner Dash, its mobile game equivalent, or Dine and Dash.