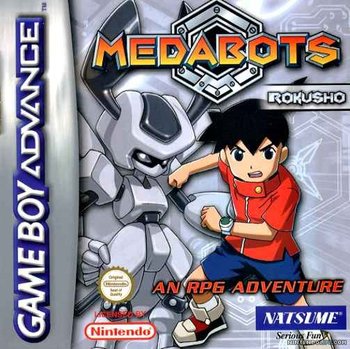 Rokusho Version
Medabots also known as Medabots RPG or Medarot 2 Core in Japan is a remake of the original Medarot 2 playable on the Game Boy Advance. It was released first released in 2002 in Europse and in 2003 in Japan and North-America. It also is the only mainline Medabots game to have been released overseas and was even released for viewers of the Anime in mind before the series would go on hiatus.

The story follows Ikki Tenryou who's obsessed with Medabots, but doesn't have one himself. However during his groceries into buying Spice-a-roni was tricked into buying a Medabot instead. However this would start his journey into becoming the strongest Medafighter of all time. During his journey he fights against the Rubberobos, an evil organization with the intention of using Medabots for evil especially since the Select Corps, the people who were supposed to fight against them, don't do anything at all.

The gameplay of this game is rather simple yet very strategic. In combat you control up to 3 Medabots whose attacks you chose or put them in auto mode along with the commands set up in order to save time. After deciding the Medabots take part in a relay style race who gets to attack first, depending on the charge time or leg attribute, the command could either go very fast or very slow. However outside Robattles, the player can customize their Medabots to give them different parts in order for them a different attack, more defense or to make them better suited for the terrain they battle on.

In 2015 it was announced that the games would find themselves released in the Virtual Console of the Wii U and just like before it was released in Europe first and North America and Japan later on.