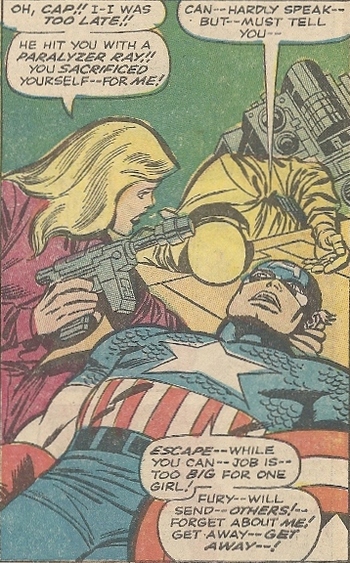 "Don't fight it, Adam. It won't do any good. I know, it must be a disconcerting feeling, experiencing complete paralyses. Your mind, fully functioning, aware of what's going on, but your body just... won't respond. It must be just awful. The effects of the paralysis will wear off once I leave. You might be a little sore. Take two aspirin, and don't call me in the morning."
— Jennifer Towne, Painkiller Jane
Advertisement:

A non-lethal version of the Touch of Death, this technique allows the character performing it to paralyze parts of a person's body, paralyze the entire person, or simply render them unconscious. There are several common ways to do this:

This may be used as a non-lethal means of disabling opponents by Technical Pacifists or others who follow the creed of Thou Shalt Not Kill or are laden some other kind of No-Harm Requirement, or it may simply be used to render opponents helpless so that executing them is made much easier.

Compare and contrast Tap on the Head, where it's implied that anyone applying a sufficiently heavy blow is capable of harmlessly knocking a person out, rather than it being a carefully studied technique.

If somebody tries to get up and get on with things despite the effects of this, they may find that Bits of Me Keep Passing Out.

The Pinky is one of the few Jelliens that cannot kill you. Instead, it will temporarily stun you when it attacks.

The Pinky is one of the few Jelliens that cannot kill you. Instead, it will temporarily stun you when it attacks.