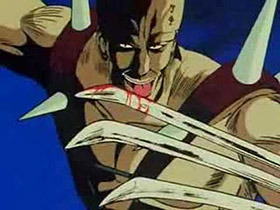 Sure, it looks impressive, but that blood's from his tongue.
"Hate to say, but that's hardly hygienic. You have no idea how many creatures that sword has cut through."
— Hiei, YuYu Hakusho
Advertisement:

A common characteristic of blade-wielding evildoers is their tendency to lick their weapons, whether clean or bloodied, as if their weapon was a cherry-flavored popsicle of non-diabetic death. Borders on Too Dumb to Live when licking the sharp edge or any surface with a coat of poison.

Generally considered a giveaway that this character is a Psycho for Hire, a Combat Sadomasochist, or otherwise sufficiently off his rocker to do anything. Especially creepy when paired with Evil Tastes Good flavored Hemo Eroticism. Conversely, can have major fetish potential.

Some characters feel a deep attachment to their weapon, almost as if it's a person.

The one doing the licking isn't necessarily evil or rather, more accurately, isn't always a story's antagonist. An Anti-Hero or Villain Protagonist can be seen doing this, especially if they're engaging their Superpowered Evil Side. Usually to showcase the fact they've either gone off the deep end or are very close to it, and that it is scary. Often a major fetish, especially if the licker is attractive.

See also Finger-Lickin' Evil, You Taste Delicious. A character who does this often may have Bloodlust. See also Lecherous Licking.

Do Not Try This at Home, unless you're really tired of having a tongue and/or you want to contract something.