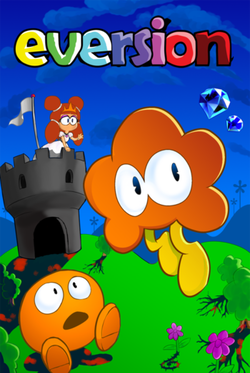 "NOT SUITABLE FOR CHILDREN OR THOSE OF A NERVOUS DISPOSITION."
— The author
Advertisement:

A freeware puzzle platformer made by our own Zaratustra as an entry to the Commonplace Book competition. Our hero, Zee Tee, is a flower with the power to reshape reality itself, at certain points. This becomes handy in his quest, as the Princess of the Flower Kingdom, Nehema, has been kidnapped by the Ghulibas from the North, and Zee Tee must set out across a colorful world to rescue the fair maiden from her peril.

But Zee Tee’s in for a surprise...

Not to be confused with aversion, subversion, Inversion, or any of the other ways to play with a trope.

Tropes that apply to Eversion (unmarked spoilers below!)