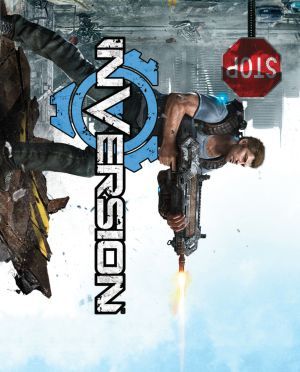 Inversion is a 2012 sci-fi cover-based Third-Person Shooter developed by Saber Interactive, best known for the time-manipulating First-Person Shooter TimeShift, the low budget Serious Sam-esque Will Rock, as well as for the Halo: Anniversary remake of Halo: Combat Evolved.
Advertisement:

To say that it borrows heavily from Gears of War is an understatement. Besides the almost identical cover-based shooting game mechanics (including the "roadie run" and dodge-rolling), the character design, weapons (especially the blade-bayonet rifle), and art style are incredibly similar to Gears.

The game's original feature is the ability to manipulate gravity, creating areas of low gravity to cause objects and enemies to float in the air (which you can punt at enemies or structures, gravity gun-style), or areas of high gravity to pin enemies to the ground or form makeshift bridges out of debris. Gravity in certain pre-scripted sections will also reverse unexpectedly or disappear altogether, allowing you to walk up the side of buildings or leap from floating platform to platform.

The takes place in the fictional modern metropolis of Vanguard City, which is suddenly devastated by a bizarre disaster that causes gravity itself to go haywire, tearing large areas of the city apart. In the midst of the disaster, the citizens of Vanguard are slaughtered and enslaved by a mysterious invading army of savages known as the Lutadore, who despite their apparent primitive nature possess advanced gravity-based weaponry. The story follows two off-duty cops, Davis Russell and Leo Delgado, as they fight their way through the devastated city in a quest to locate Davis's missing daughter.

Not to be confused with Eversion. Nor does this game have to do with Inverted Tropes.