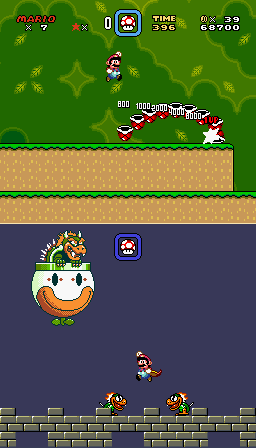 Above: A normal level shows your score, coins, time remaining, and lives.
Below: The Final Boss is too epic for that.
Advertisement:

This is the thing where, during a climactic Boss Battle or event in a video game, the game's display (showing Score, the Life Meter and such) vanishes away, leaving a completely unobstructed view of the game area. Presumably, something so awe-inspiring and theatrical is about to happen that it deserves the player's complete attention, as if it were a Cut Scene.

But also, technical limitations of 8-bit systems often prevented both the display and the large animated segments of the boss from being displayed simultaneously and the majority of these examples seem to be on 8-bit systems.