Video Game / Tales of the Abyss 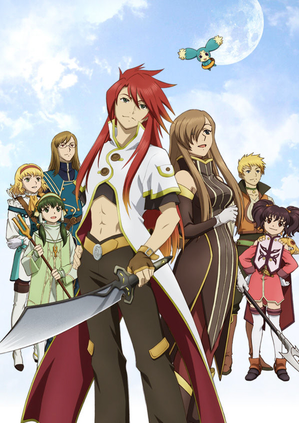 The eighth mothership title in Namco's Tales Series, and its tenth anniversary title. It was released in Japan for the PlayStation 2 in 2005, and in North America (but not Europe) in 2006.

Thousands of years ago in the fantasy world of Auldrant, the Songstress Yulia Jue used her powers to read the memories of the planet itself. She detailed her findings in a vast prophecy known as the Score, which promised unlimited prosperity and wealth for the entire world at the end. In the centuries since then, two great nations known as the Kingdom of Kimlasca-Lanvaldear and the Malkuth Empire have fought over the scattered Fonstones upon which the Score is written. Between them lies the Order of Lorelei, a religious order dedicated to the safekeeping of the Score, who act as a neutral arbitrator.

Tales of the Abyss follows the adventures of Idiot Hero, Jerkass and Sheltered Aristocrat Luke fon Fabre, a Kimlascan noble who has never been allowed outside of his manor since he was kidnapped from his vacation home seven years previously. Due to the trauma from this incident, he developed retrograde amnesia concerning his entire existence, and had to be taught everything again from scratch, even basic skills like how to walk.

His mundane existence changes dramatically when mysterious White Mage Tear Grants breaks into Luke's manor with the aim of killing his swordmaster, her brother Van Grants. Upon touching Luke, she and Luke are accidentally teleported halfway around the world, landing right in the middle of Malkuth. Together, they try to return Luke home while gradually unravelling the secrets behind his status as The Chosen One of legend.

The game has an Animated Adaptation produced by Sunrise. The first episode aired on October 3, 2008 on TOKYO MX; in addition, another channel had an hour long special the following day, showing both the first and second episode. The anime adaptation was released on October 11, 2011 by Bandai Entertainment in North America, albeit sub-only, even though the video game has an English dub.

The game was originally released for the PS2, and a port for the Nintendo 3DS was released internationally. It was released in Europe on November 25th, 2011, marking the first time the Old Continent gets to officially play it. The 3DS version was released in North America on February 14th, 2012.