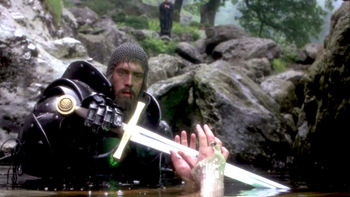 "Standing before the sword you long sought after, I can only wonder at what thoughts must have passed through your mind as you learned the truth of its awesome, terrible power. Soul Edge's legacy lives on to this day. It most likely will live on forever, for humans will always desire the ultimate weapon."
— Tristy, Soulcalibur II

There's always that one rule in fantasy worlds that no matter what other, more potent weapon types that exist, the sword is the one weapon type that is always held as the standard by which the others are judged, usually due to some ancient Infinity +1 Sword that just so happens to exist. Yeah, that's right, even compared to a powerful Wave-Motion Gun or a crossbow shooting explosive shells, the fine blade always comes out on top. It becomes all the more persistent in a world where Heroes Prefer Swords and corresponds with the main character being a sword user, in cases where the overall weapon type roster is of limited availability to characters.

This is mainly due to the Good Weapon, Evil Weapon principle making it the norm to have the Infinity +1 Sword or the swordly MacGuffin be in the hands of the Hero, (because straight-edged longswords are considered heroic weapons, and everybody likes to see the best stuff in heroic hands), so the end result is that all Infinity Plus One weapons must be swords.

See also Katanas Are Just Better for when it applies to, well, katanas. Related to Rock Beats Laser, with the sword being the rock.