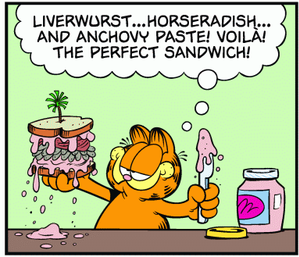 Oh, GROSS! He left the crusts on!
Reporter: So, Mr. Presley, what do you do every morning when you wake up?
Elvis Presley: Simple. I get out of bed, get dressed, and make a Peanut Butter-Banana-Bacon Sandwich.
— The King of Rock 'N Roll in interview
Advertisement:

Bizarre Taste in Food is when a character, main or minor, does something irregular to their meal that becomes a defining trait. Note that this has nothing to do with the viewer or players' taste, but the characters who witness it.

Differs from Cordon Bleugh Chef in the sense that the food is not inedible because of the cook. It's when the character does something minor to the food that completely transforms it. The food doesn't have to be particularly disgusting, just something other characters find to be so.

Usually happens with the Big Eater of the group. Typically after doing so, the Cloudcuckoolander will try the food and proclaim that it tastes better, much to the chagrin of the others.

Can be a Nutritional Nightmare if the combinations are extreme in unhealthiness. If the strange taste preferences are due to cultural differences, it's Foreign Queasine. If it's due to different tastes between species, it's Alien Lunch. Has overlap with Wacky Cravings when a character is pregnant. Dog Food Diet is when the character is eating the food by necessity rather than taste preference. Paste Eater is a particularly extreme example. Other specific examples include Eat Dirt, Cheap and Metal Muncher. Compare Extreme Omnivore. Contrast with I Ate WHAT?!.

Not to be confused with Bizarre Foods, although it does lead to each other.