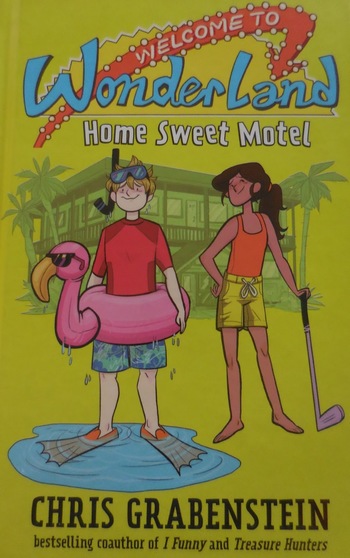 Welcome To Wonderland is a Children's Literature series by Chris Grabenstein.

P.T. (Phineas Taylor) Wilkie is the luckiest kid in the world. He gets to live in the best place on earth with his mom and his grandpa... the Wonderland Hotel in St. Pete. And he loves it. The Hotel was originally a small-time amusement park called "Walt Wilkie's Wonder World" when his grandpa opened it for business in October 1970 (exactly one month before Disney World opened in Orlando). Now it's a motel with a whole bunch of statues, and a load of stories to tell. There's Morty Mouse, the sausage-and-cheese-loving mouse, Dino The Dinosaur, Pirate Pete at the Putt-Putt course, Freddy the Frog slide, and most recently, the Hawaiian Happy Stinky Fruit. Plus, there's amenities like free poolside ice cream, and a vending machine in the living room (okay, the hotel lobby).

So, yeah, the Wonderland is pretty much the best place to be. And P.T. couldn't imagine living anywhere else.

The series has four books.

Welcome To Wonderland contains examples of: