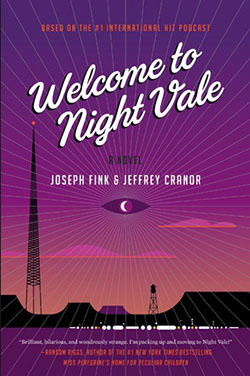 Welcome to Night Vale is a Spinoff novel based on the podcast of the same name. It was written by series writers Joseph Fink and Jeffrey Cranor and published in 2015 by Harper Perennial and Orbit Books.

Diane Crayton is a single mother who's lately been feeling pressure from her shapeshifting son Josh, who wants to know more about his missing father. Diane wants Josh to have nothing to do with his father, which gets complicated when Diane starts seeing him everywhere. To distract herself Diane starts looking for her coworker Evan, who disappeared and no one remembers.

Eventually Diane and Jackie's stories intersect. The novel is regularly interrupted by segments from Night Vale Community Radio, sometimes to talk about events related to the main plot, oftentimes to report on unrelated or parallel running stories.