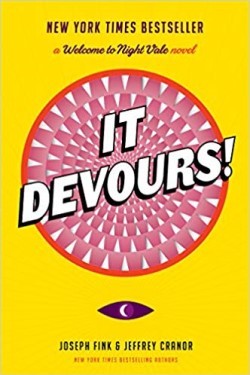 It Devours! is the second Welcome to Night Vale novel, written by Joseph Fink and Jeffrey Cranor.

Something is creating giant sinkholes around Night Vale, destroying buildings and swallowing up people. Resident scientest Carlos assigns one of his assistants, Nilanjana Sikdar, to investigate the cause of sinkholes. Nilanjana's investigations leads to the Joyous Congregation of the Smiling God and a person known only as the Wordsmith, whose church writings parallel what is happening in town.