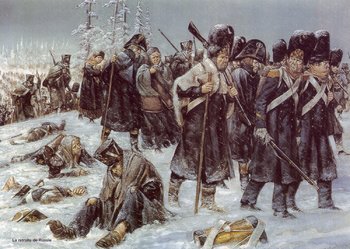 This will not end well for Napoleon.
Walking might not sound like the most dangerous mode of transportation over long distances, but without the necessities for travel - food, water, protective clothing, shelter, medical supplies and other essential provisions - a long-term journey on foot can be every bit as deadly as any car crash. As such, characters who embark on such journeys do so only due to poor planning, recklessness, or sheer desperation.

Often (but not always) conducted in groups, this trope railroads the participants into a long and painful voyage through territory where seeking help is not an option, often via a Ridiculously Difficult Route: the hazards can range from Hostile Weather, angry locals, disease, starvation, dehydration, and dangerous wildlife. Expect a Dwindling Party in many cases.

Attentive tropers may notice a distinct similarity to the River of Insanity, both involving a doomed expedition travelling along a set path. However, Instances of this trope are distinguished by the fact that exploration or adventure isn't necessarily the goal of them, and the fact that the participants can literally be forced into it by circumstances beyond their control.

Compare Walk into Mordor and Deadly Road Trip. Contrast Death March for the involuntary penal variation on this trope.