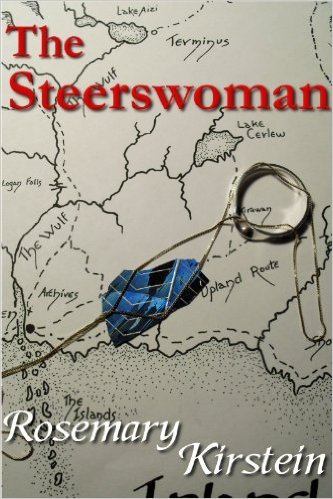 The Steerswoman series is a series of novels by Rosemary Kirstein, set in what appears at first to be a Standard Fantasy Setting, complete with demons, dragons, gnomes, goblins, and wizards.
Advertisement:

(Steerswomen do not get on with wizards, who guard their secrets jealously and do not care whether they are placed under ban; they have their own mysterious sources of knowledge.)

When Rowan sets out to find the origin of an unusual gemstone, she thinks it's just a curiosity. Certainly she doesn't expect it to be part of a secret which somebody might kill to protect. As her investigation proceeds, she discovers that the gemstones' origin is tied up in secrets concerning the origin of the world as she knows it (which is far deeper and stranger than she ever imagined), and that everybody's future may be hanging on the truth she uncovers.

The series so far consists of four novels:

The first two novels have also been published in a single volume under the title The Steerswoman's Road.

A large part of the fun of the series is figuring out, along with Rowan, what's really going on, so there will be a lot of spoiler tags from this point on.