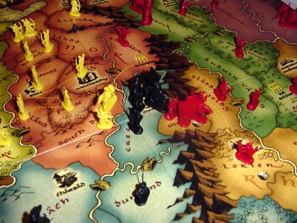 Galadriel may have trouble fighting off Napoleon's black horde.
Advertisement:

In most Real-Time Strategy games, from Dune II on, the single-player component consists of a number of stand-alone scenarios linked together in a campaign. In recent years some games have eschewed this, using a world map much like the board game Risk either to allow a measure of choice in what scenario the player wants to play or as "eye candy" for the in-story movements of their army. The map divides a countryside, country, world, or even galaxy into distinct political and/or cultural component groups, sometimes uniting small regions into a larger one, or dividing a large one into its components. It's often color coded to help denote larger groupings of states/countries or allies and enemies, and conquering all of one is often a game objective.

This is classically called an "area-based map". Contrast this with a grid-type map (e.g. chess), a hex map, or a point-to-point map.

The player's armies are often represented on the map itself, and can be moved only to a contiguous territory (unless the game allows for special "air" units or the like). If the game allows strategic combat as well, a scenario where the individual units can be controlled starts, the nature of which usually is determined by the territory in question. In most cases only a few of the scenarios are pre-scripted, with the majority being skirmishes played against the computer.