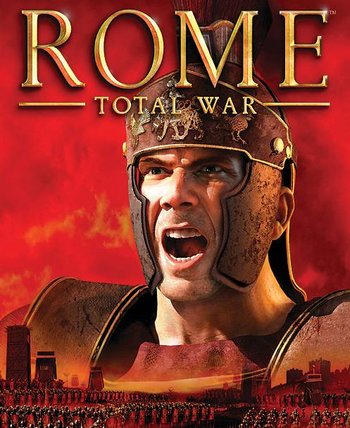 "What awaits us?"
"My love you march to war defiant. May god returneth you triumphant. And you'll be brave, be strong, be true, my love. And I'll be waiting for you, forever...
— Forever
Advertisement:

Rome: Total War is the third game in the Total War franchise of strategy games. Starting around the time of the First Punic War, the game allows the player to take control of one of several factions vying for supremacy in Europe, North Africa and the Middle East. As the title suggests, Rome is one of the big players here (initially as The Roman Republic and later The Roman Empire), and is in fact divided up between three families, the Julii, Scipii, and Brutii, as well as the Senate. If the player controls a Roman faction, his goal is not merely to forge an empire for himself, but, when the time comes, to take on the other Roman factions in a brutal civil war with the ultimate goal to be declared Emperor.

As with the other games in the Total War series, Rome is a mixture of Real-Time Strategy and Turn-Based Strategy. This entry introduces several changes compared to the previous games, however. For one, the units on the battle field are now depicted in full 3d, rather than the sprites used in Shogun: Total War and Medieval: Total War. The campaign map has been changed from Risk-style movement of troops between provinces to a more detailed turn-based game that allows precise positioning of armies. When two enemy armies meet, they fight a battle in real-time, with the landscape reflecting that of the campaign map.

In 2021, the Creative Assembly announced a remastered version of the game and its DLCs, called Total War Rome: Remastered, a comprehensive re-release of the game, including hundreds of changes such as new building and unit models, 4K resolution, enhanced environment textures, modern graphical effects and lighting systems, unlocking 16 previously unplayable factions across the base game and expansions, new tactical systems for both the strategic map and battle map, a massive rebalance of the entire tactics side of the game, cross-platform multiplayer and the addition of the Merchant agent type from Medieval II. Also, certain modding restrictions from the original game were removed.