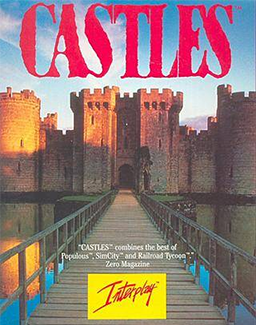 Castles is a Real-Time Strategy game developed by Quicksilver Software, published by Interplay Entertainment, and released in 1991. A "spiritual ancestor" to newer castle sims like Stronghold, it focuses around a Medieval English king's efforts to fortify Wales with a series of strong castles to withstand local uprisings.
Advertisement:

In Castles, the player must construct anywhere between 3 to 8 castles (depending on difficulty), with each castle comprising a single "mission" in the game. Starting with an empty field, you must design your castle using various set-pieces of walls and towers. Then, laborers of different professions must be recruited to construct the various stages of each piece. Taxes must be raised, and naturally an army built to protect the castle from attacks by various local factions (as well as some supernatural armies, when the game's "fantasy" mode is activated).

The game itself runs in Real Time. Occasionally, it is interrupted with cutscenes presenting a very short Dialogue Tree in which various characters appear at your court to request audience with you. Combat also runs in real time, with your hired defenders trying to prevent the enemy from toppling your built-up castle segments. Once the castle is complete (preferably with a moat dug around it), a massive battle erupts in which the locals make one final attempt to overwhelm you with great numbers. Successful defense at this stage will finish a "mission" and move on to the next castle.

The game was highly acclaimed, and received a reasonably good sequel that took the castle-building business one step further, mixing in "grand strategy" elements as your faction vied for control of Medieval France.