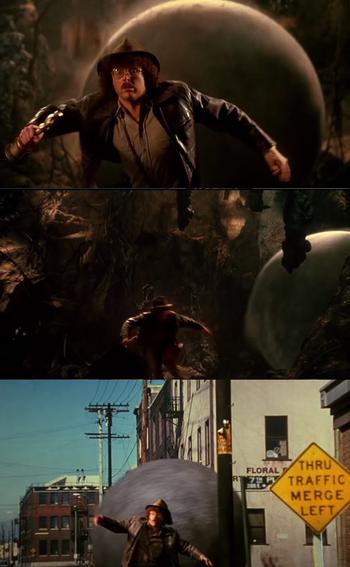 It followed me home, can I keep it?
It's not uncommon to find video games in which the damage of a projectile attack is calculated independently of the on-screen projectile actually hitting its target. Things get extra weird when the on-screen visuals are subservient to the calculations, as opposed to the other way around.
Advertisement:

In many games which show projectiles, a shortcut often taken by programmers who don't want to bother with complexities such as tracking and physics is to assume that every projectile attack will ultimately "hit" or "miss" its target and dictate this outcome ahead of time, usually with a die roll or hitscan trace. Nothing the target can do after that will avoid damage, the projectile follows the target perfectly, often even through obstacles.

This doesn't really cause a problem with lasers and stuff that move too fast for the eye to track anyway, or when attacking a stationary target, but for slower projectiles like medieval arrows, stones and mortar shells — or any case where it otherwise takes a long time for the projectile to actually close the distance — the effect can be quite surreal.

Common symptoms include units taking damage even when the projectile hasn't visibly collided with them (yet), projectiles changing directions (inexplicably, that is) in mid-flight to intercept their target, and so on. Logically, projectiles which are explicitly designed (or enchanted) to home in on their target are exempt from this trope, no matter how dramatically they change directions.

Compare Stalactite Spite. Use of this trope may grow less frequent over time as proper physics rendering becomes more advanced, easier to do and expected by players of genres where it was once endemic but at the same time it may be continued as a Retraux touch. If this happens with Frickin' Laser Beams, you've got Homing Lasers.

Compare hitscan, which often overlaps. Not to be confused with Guerrilla Boulders, which describes obstacles that keep coming until you approach its source.