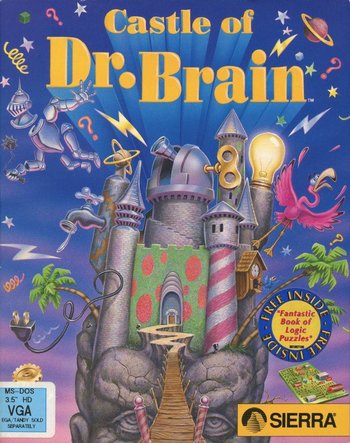 Hey, this isn't Eureeka's Castle!
The Dr. Brain series of puzzle-based games from Sierra. Created by Quest for Glory co-designer Corey Cole, the series is one of the few examples of Edutainment Games which are actually good games in their own right.
Advertisement:

The series began with Castle of Dr. Brain. Here, the Featureless Protagonist is applying for an apprenticeship in Brain's laboratory. The entry exam consists of, well, reaching the laboratory, which is hidden deep inside the titular castle. Each step of the way is blocked by a puzzle or set of puzzles. The player must proceed through this linear maze, solving the wide variety of different puzzles in sequence, until the final puzzle lands the player in the laboratory. Puzzles in this game ranged from memorizing sounds and patterns, to jigsaw and word puzzles, and even rudimentary astronomy. It was also possible to change the difficulty of the puzzles, making it easier to finish the game if one or more puzzles proved very difficult. It also made the game accessible to both children and adults, who could experience roughly the same amount of challenge from what are essentially the same puzzles. Replay value was rather limited, though, due to all of the puzzle contents being the same every time and only completable once (on a particular difficulty level) before having to start over from the beginning.

In the second game, The Island of Dr. Brain, the protagonist is now Brain's apprentice, and must travel to Dr. Brain's secret island to retrieve a massive battery, which is to be used to power Brain's newest contraption. Once again the island is a fairly-linear series of puzzles, each one requiring different skills to solve. Almost all puzzles in this game are either completely new, or are advanced versions of the puzzles presented in the original game. For the most part however, the Island is a more difficult game than its predecessor thanks to some truly devious puzzles. The use of a calculator can come in handy. In addition, the game keeps a scoring sheet of all puzzles solved within a single run. The game awards a gold "plaque" for solving puzzles on the highest difficulty, silver for medium, and bronze for easy. Also, unlike the first game, most of the puzzles are randomly generated and can be re-completed as many times as you want during a single game.

The third and fourth games (The Lost Mind of Dr. Brain and The Time-Warp of Dr. Brain, respectively) went in a slightly different direction. Instead of offering a linear path through various kinds of puzzles, gameplay was made more "casual", with all puzzles available for play at any time. You had to complete each puzzle repeatedly a certain number of times to "finish" one area of the game, and the end-game puzzle was unlocked only once all areas were finished. However, you could keep playing the puzzles over and over again, at varying difficulties, at any time. While certainly more repetitive than the earlier games, these sequels offered both a more open-ended experience as well as more content for players who enjoyed one or more puzzles and wanted to play them repeatedly. Unfortunately for the more cerebral crowd, a good portion of the puzzles in both games were practically arcade games more than they were any sort of puzzle or at all educational in nature. Needless to say, Corey Cole had nothing to do with either of these games.

Sometime after the fourth game was released, the rights to the Dr. Brain series were acquired by Knowledge Adventure, creators of the JumpStart series, and they released four more games: Dr. Brain Thinking Games: Puzzle Madness and IQ Adventure, Dr. Brain: Action Reaction, and The Adventures of Dr. Brain. The Knowledge Adventure games recast Dr. Brain as a twenty-something genius instead of mad scientist in his sixties. The Thinking Games sub-series had less of an emphasis on educational content and focused more on solving puzzles, while Action Reaction is a straight up first-person 3D platformer with a few puzzles thrown in.

The first two games, Castle Of Dr. Brain and The Island Of Dr. Brain were made for MS-DOS using 256-colour VGA graphics, support for common sound cards and shipped on floppy disks.

The third installment, The Lost Mind Of Dr. Brain was released on a hybrid CD for Windows 3.1 and macOS and included digitized speech in place of text instructions, although the game would only work if the user manually set their display color-depth to 256 colors. The only files written to the user's hard drive were the saved games, requiring the CD to play the game.

All three games work perfectly under DOSBox (or Windows 3.1 under DOSBox in the case of the third game). Alternatively Scumm VM added support for the first two games.