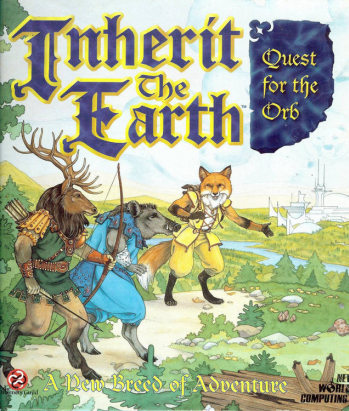 "We see the sky, we see the land, we see the water - and we wonder, are we the only ones? Long before we came to exist, the Humans ruled the Earth. They made marvelous things, and moved whole mountains. They knew the secret of Flight, the secret of Happiness, and other secrets beyond our imagining.
The Humans also knew the secret of Life, and they used it to give us the four great Gifts: Thinking minds, feeling hearts, speaking mouths, and reaching hands. We are their children.
Advertisement:
They taught us how to use our hands, and how to speak. They showed us the joy of using our minds. They loved us, and, when we were ready, they surely would have given us the secret of Happiness.
Now we see the sky, the land, and the water we are heir to, and we wonder, Why did they leave? Do they live still, and whence? In the stars? We wonder, Was their fate good, or evil... And will we also share the same fate one day?"
— A Story of the Morph, as preserved by the Rat Tribe

Inherit the Earth: Quest for the Orb is a point-and-click Adventure Game created by The Dreamers Guild, published by New World Computing in 1994, and re-released under Wyrmkeep Entertainment.

Following the apparent disappearance of humanity, the world has been inhabited and civilized by anthropomorphized creatures descended from experimental animals endowed with self-awareness by mankind. They've created Low Fantasy medieval societies, buoyed in places by human artifacts, such as the voice-interactive Orbs.

The major plot of the game involves the false accusation of Rif, a member of the Fox Tribe, of stealing the Orb of Storms from the temple where it was being used to forecast the weather and, probably, control it. Holding his girlfriend, Rhene, hostage as an incentive, his accusers task him with retrieving the Orb in order to clear his name. He embarks upon his quest with two helpers and watchers - Sergeant Okk, the boar, and Lieutenant Eeah, the elk - engaging in various quests and trials of intrigue along the way.

's webpage. The first storyline, Little Wolf Lost, is complete. The second, Chief Among Us, is also complete. Two others, Short Tales and Catch and Release were also finished between 2014 and 2017. The latest, Short Tales 2, is ongoing.

Funding for the second game, Sand and Shadows

, has occasionally been held through Kickstarter and is currently being raised through Wyrmkeep's Patreon

The core game, Quest for the Orb, provides examples of:

The comic's second storyline, Chief Among Us, provides examples of: