Video Game / Indiana Jones and the Fate of Atlantis 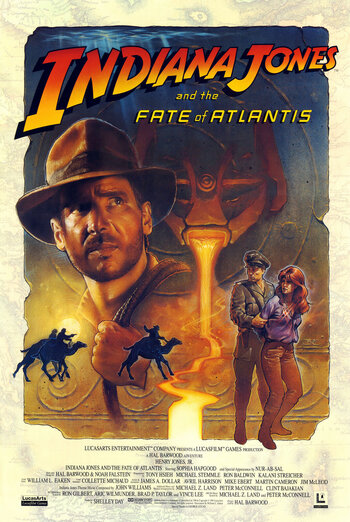 "If you want to experience the greatest Indy film that was never actually a film, Fate of Atlantis is where it's at."
— Michael Plasket/Sotenga

Two 1992 video games by LucasArts, based on the popular Indiana Jones movie series.

The first (and the most well known) is an Adventure Game with painted cinematic screen-by-screen backgrounds, while the second was subtitled "the action game" (it was more like an Action-Adventure, viewed from an faux 3d isometric perspective, and based solely on a few select moments from the point and click adventure version). The action game is mostly forgotten today. This article, for the most part, discusses the adventure game, the second Indiana Jones adventure using LucasArts's SCUMM engine,note Script Creation Utility for Maniac Mansion — Maniac Mansion being the game for which it was originally designed released three years after Indiana Jones and the Last Crusade.

Set in the months prior to World War II, the storyline sees Indy team up with an old flame, Sophia Hapgood, an expert on the mythical city of Atlantis, and in particular its god Nur-ab-sal. This being an Indiana Jones story, it of course turns out that Atlantis was real, and our hero finds himself in a race against time to get there before the Third Reich can harness its power to Take Over the World.

This game was the first time that an Indiana Jones graphical video game had featured an entirely original storyline, rather than one based on the storyline of a film. Given the reluctance of Steven Spielberg and George Lucas to confirm a proper Indy sequel following The Last Crusade, many fans came to refer to this game by the informal title Indiana Jones 4. For years afterwards, lazy journalists used this as conclusive proof that the next movie sequel would feature Atlantis, a rumour which continues to pop up, even after the eventual release of Indiana Jones and the Kingdom of the Crystal Skull.

The Nintendo Wii version of Indiana Jones and the Staff of Kings also features the complete full version of The Fate of Atlantis as an unlockable bonus game.