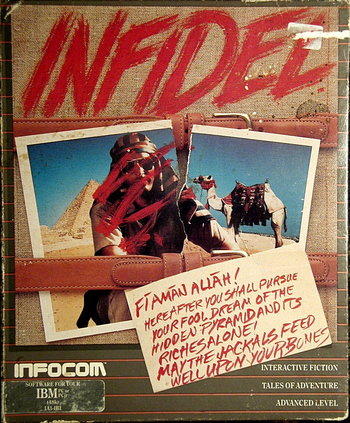 Infidel is an Interactive Fiction game published by Infocom in 1983.

The player takes the role of an Adventurer Archaeologist/treasure hunter exploring a recently-unearthed pyramid in the hope of discovering a stash of valuable artifacts.

The game is mainly remembered for its ending, which received a divided response from the game's audience. Infidel is an experiment in averting the Featureless Protagonist common to interactive fiction: the player character is not just a stand-in for the player, but an actual character with explicitly described goals and personality traits. He's actually quite unpleasant, greedy for fame and fortune, having cheated several people to get his expedition to the pyramid first, and mistreated his subordinates so badly that at the beginning of the game they all pack up and go home, leaving him to press on alone. This plays into the ending, in which the protagonist gets his comeuppance in a way that's dramatically appropriate but, in the experience of some, less satisfactory when considered as a reward for the player who has been encouraged to identify with the protagonist and put in the effort to solve the puzzles and reach the ending.