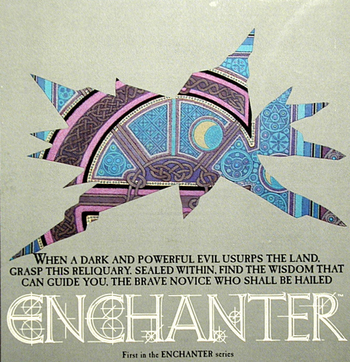 The Enchanter trilogy is a series of Interactive Fiction games published by Infocom. It is set in the same world as the Zork series, and takes place in 956 GUE, eight years after the events of the original Zork trilogy.
Advertisement:

The main magical mechanic involves learning magic words, such as BLORB, FROTZ and NITFOL, each of which has a particular effect.

The tone of the series gets darker as it progresses, and the puzzles more difficult.