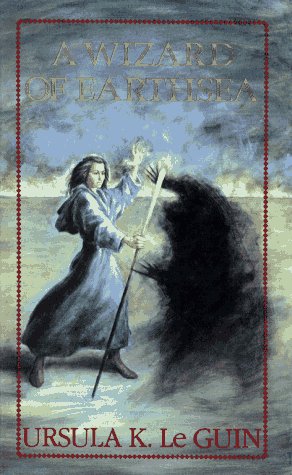 A classic series of high fantasy books by Ursula K. Le Guin, which began as a pair of short stories in 1964, "The Word of Unbinding" and "The Rule of Names". These stories were shortly followed by a trilogy of young adult novels:

Decades later, Le Guin returned to Earthsea with a fourth novel, followed after another decade by a collection of new short stories and one final novel. These books were more adult than the original trilogy, dealing with some very mature subjects.

Le Guin revisited Earthsea again in 2014 with the short story "The Daughter of Odren", followed in 2018 by the very last Earthsea story, "Firelight".

The world of Earthsea is a sprawling archipelago where magic is a part of everyday life, dragons are an occasional threat, and the afterlife is a very real place. The original trilogy focuses on Ged, a wizard who rises from a modest life as a goatherd in a sleepy village to become the Archmage, the master of the school of magic who rules in place of Earthsea's long-abandoned line of kings. Ged overcomes grave mistakes made early in his life in A Wizard of Earthsea, then acts as a mentor to the young priestess Tenar in The Tombs of Atuan and the young prince Arren in The Farthest Shore as each of these characters comes of age and accepts their role in life as he once did.

The later books shift the focus away from Ged and instead build Earthsea itself as a more complex and rich character, exploring the history and geography of its various islands, examining the lives of commoners who don't spend their days sailing around on grand adventures and speaking to dragons, and addressing the massive weaknesses of the archipelago's society, especially its treatment of women.

In many ways the Earthsea Cycle represented a radical departure from the then dominant view of fantasy in featuring a wizard as the main character rather than as a supporting character, featuring a cast of mostly brown-skinned and red-skinned characters, featuring women in prominent roles, exploring an islander society instead of the standard medieval European setting, and advancing the story by having the characters make increasingly complex moral and personal decisions rather than simply winning in sword fights or obtaining treasure. It also avoids ever becoming particularly verbose; all but the fifth book are well under 300 pages, with few words spent on the intricate and time-consuming exposition that defines other fantasy authors like Tolkien. 2018's The Books of Earthsea, the first book to collect the Cycle in its entirety, books, short stories and all, clocks in at just over 1000 pages in hardback, including Charles Vess's illustrations.

The series was the subject of an animated film from Studio Ghibli called Tales from Earthsea and a TV adaptation by Syfy, originally called Legend of Earthsea, and later retitled Earthsea.