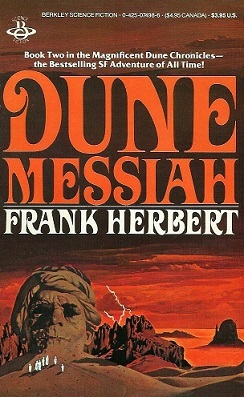 "Here lies a toppled god —
"His fall was not a small one.
"We did but build his pedestal,
"A narrow and a tall one.
—Tleilaxu Epigram
Advertisement:

Dune Messiah is a Science Fiction novel by Frank Herbert published in 1969. It is the sequel to the popular Dune and the second of the six original Dune Chronicles by him.

(Warning: Most spoilers below, including ending spoilers, are unmarked, even in the summary.)

Dune Messiah concludes Paul's story, as he came to realize in Dune that prescience is a trap—by seeing into the future, one dooms oneself to live out that vision. Years later, in spite of Paul's best efforts to prevent it, the war he began on Arrakis has become an interstellar jihad that has sterilized entire planets and made him one of history's greatest murderers.

As the remaining powers in the galaxy—the Spacing Guild, the Bene Gesserit sisters who control religion, the Bene Tleilaxu masters of genetic engineering, and the children of the deposed Emperor Shaddam, one of whom has been married to Paul for political reasons—begin to conspire against him, his visions grow darker. Paul allows the events of the conspiracy to play out, resulting in his blindness and indirectly, the death of his beloved concubine Chani, while giving birth to his twins.

As the result of their attempt to make Arrakis temperate and verdant, the sandworms are dying—and with their extinction will come the end of the spice, economic collapse, and the extinction of the human race. Ultimately, Paul finds freedom by wandering into the desert to die. But the legend and the myth of Muad'Dib lives on.