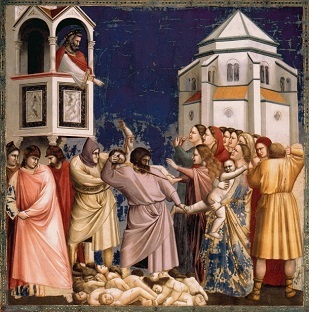 The Big Bad (often an Evil Overlord) has just learned that a child that can defeat them has been or soon will be born. The obvious solution to this problem is to Screw Destiny. Nip this danger in the bud and kill the infant Hero before they can become any kind of threat. This is the stage where the problems crop up. Either the Big Bad has no idea who this child actually is or other characters who are also aware of this destiny have taken the initiative to hide and protect the child before the Big Bad can actually reach them. Or the would-be killer thinks they've done the deed, but unbeknownst to them, some force or benevolent person intervenes and the child is actually Not Quite Dead. Or the Big Bad sent a mook to do it, but the mook either can't go through with it or botches the whole thing through incompetence. Whatever the mechanism, the upshot is that You Can't Fight Fate.

Often the only thing to do in cases where they can't identify the child is to attempt to track down the newborn hero, baby-by-baby if necessary. The Big Bad will investigate or, if impatient, simply kill any child in the proper age range to attempt to secure their safety — this may result in a Childless Dystopia if he's thorough enough. Inevitably, it never works, and if innocent children are killed, the resultant crossing of the Moral Event Horizon makes clear just how bad the villain is — and of course karmically seals their fate. Worse yet, this act often directly backfires, giving the hunted newborn a reason beyond mere prophecy to go after the Big Bad after he's grown up enough to take him on; this is a common Self-Fulfilling Prophecy.

This being a form of Villain Ball, it almost never occurs to anyone that a wiser thought might be to try to find and raise the child himself. Though you might occasionally see it among smarter villains, who take the view that the kid might love him too much to finish him or, in the worst-case scenario, will be close at hand if he does Heel–Face Turn. This often doesn't work either, though, and is irrelevant if the prophecy is that the child will defeat him. Then again, all that's needed for the Prophecy to be fulfilled is for the would-be slayer turned protegé to become The Starscream (and be successful).

Sister Trope to Genocide Backfire, with which it can and does overlap. The primary difference is that this trope is specific to a Big Bad trying to find a newborn Hero before they can be a threat. No more, no less. Genocide need not be a part of the method. The main factor for whether or not such a situation is this trope is if the genocide is merely a means to an end (Kill Tribe A to prevent the rise of Child B) or an end in itself (Kill Tribe A to stop any rising, period).

Also compare Offing the Offspring for those occasions when the child is the son or daughter of the Big Bad. See also Improbable Infant Survival, which is, in writing terms, one of the primary reasons this rarely succeeds. If Time Travel is involved, see Make Wrong What Once Went Right.

Not to be confused with Nice Job Breaking It, Hero, or the trope's inversion, Create Your Own Villain. However, it can be related to Nice Job Fixing It, Villain

They didn't get Moses

They didn't get Moses