Film / Escape from the Planet of the Apes 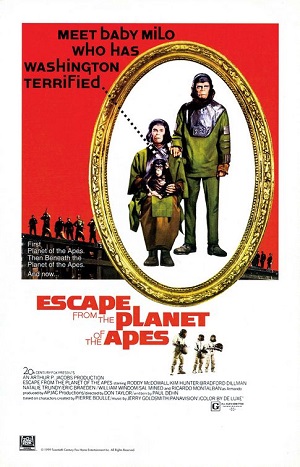 Taylor's spaceship crashes off California's southern coast in 1973. Inside are three talking apes - Zira and Cornelius, along with another scientist, Dr. Milo, having managed to escape the destruction of Earth in the last movie and travel back in time. Milo is killed in Los Angeles' zoo by a non-civilized gorilla, and this prompts a pregnant Zira to baptize her son "Milo".

Considering the dangers of talking apes, the US Military starts chasing them, prompting Zira, Cornelius, and Milo to get hidden in Armando (Ricardo Montalban)'s circus.

The sequel to this movie, Conquest of the Planet of the Apes, was released in 1972.