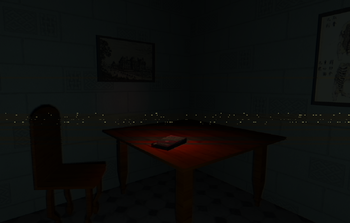 You never came back.
"In the psychology of the modern, civilized human being, it is difficult to overstate the significance of the house."
Advertisement:

Anatomy is a Psychological Horror game created by Kitty Horrorshow. The game starts with the player inside of an empty and abandoned home, with the only company in it are cassette tape recordings from someone who had been in there prior, which the player finds throughout the house. The person on the tapes describes that a house is very resemblent of the human mind and body, and goes into detail why it therefore can't be trusted.

for only two dollars.

Because this is a very short game (roughly half an hour in length), expect spoilers below.