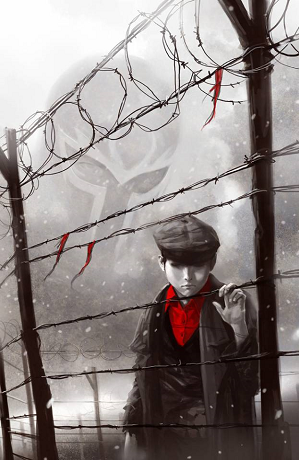 A boy and his future self.
"A child is born to innocence. A child is drawn towards good. Why then do so many among us go so horribly wrong? What makes some walk the path of darkness, while others choose the light? Is it will? Is it destiny? Can we ever hope to understand the force that shapes the soul?"
— Heroes
Advertisement:

Because almost every character began their life as someone good, the moment where that changes is a powerful beat in the story. Typically this moment happens early on, to establish why there's a conflict in the first place, but it can also be established via Origins Episode or Flashback later in the story. This is the moment when a character who could have been on the side of Good (or at least not taken any actions) decides that the only way that they can get what they want is to become a villain.

This, naturally, is especially common with Fallen Heroes, who usually get a Downer Ending where they lose faith in themselves and/or humanity. This will be especially poignant if they Used to Be a Sweet Kid (see also: Freudian Excuse). The moment doesn't always mean that a heroic character became a villain, they just need to have had a moment in their lives, where they didn't ruin lives and haven't yet made choices that hurt others. If this is the subject of the main plot, you may be watching a Protagonist Journey to Villain or Big Bad Slippage. Details of a usually (but not always) Dark and Troubled Past may be revealed.

Keep in mind that the reasons aren't always good ones, if there is such a thing as a good reason for turning evil.

Contrast Diabolus ex Nihilo, when the villain's backstory is pointedly left absent. See Ambiguous Start of Darkness for when it's unclear when the villain choose evil over anything else.

The Trope Namer is The Order of the Stick prequel Start of Darkness (overlapping with Origins Episode), whose title is itself referring to the 1899 Joseph Conrad novel Heart of Darkness, which tells the story of the protagonist's journey down the Congo river to rescue the mysterious Mr. Kurtz, an experience that changed his entire outlook on life for the worse.