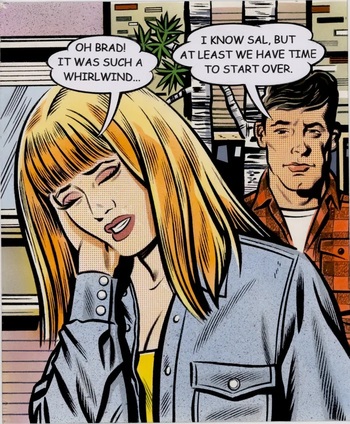 "Mark and Ellen had gotten married a little after Tom and Kitty. It was a mistake from the first day. Two nice people not made for each other. ... Then it broke wide open and they were divorced. Mark was thankful there had been no children."
— Exodus (from the original novel)
Advertisement:

Alice and Bob got together, they got engaged, and they got married. Everyone expects that they'll live Happily Ever After and grow old together. Then the news is broken that Alice and Bob are getting a divorce, even though they haven't even been married 5 years. What happened?

Reasons for the divorce vary: one or both of them lacked maturity to sustain a long-term relationship, Alice and Bob had radically different goals and ideals in life, flaws (big or small) that they overlooked are coming to light, they married for the wrong reasons and/or too early. Whatever the reason(s) given, generally the marriage lasts less than five years and doesn't produce any children. It is also always the first marriage for at least one spouse very often both, and may be followed by a more stable long-term marriage for one or both parties.

May be the result of Relationship Writing Fumble, Fourth Date Marriage, Married Too Young, Alice and Bob being Strangled by the Red String, or simply the idea that True Love Is Boring. It may be used to prevent Shipping Bed Death. May or may not result in one or both halves of the ex-couple going on to become a Serial Spouse if subsequent relationships are similarly doomed.