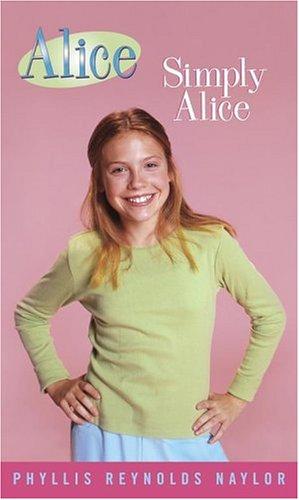 Alice is always Alice.
"What I'm finding out about growing older is that there are just as many rules about lots of things, but there's nobody watching.”."
—Alice McKinley, on growing up in Alice In Rapture, Sort of.
Advertisement:

The Alice Series is a Coming of Age book series written by Phyllis Reynolds Naylor. There are three prequels to this series. The first one, Starting with Alice, describes Alice in third grade. Alice in Blunder land is Alice in fourth grade; The final prequel, Lovingly Alice, follows Alice through the troubles of fifth grade. The first book (after the prequels) is The Agony of Alice.

The Alice series follows the main character, Alice McKinley, known as "Al" to her father and older brother as she grows up in Silver Spring, Maryland. Her mother died of leukemia when Alice was five. Alice has a hard time at first growing up in an all-male household, but her father and her brother, Lester, prove to be honest and open about almost everything Alice talks about. Alice has very little memory of her mother, often confusing her with her aunt, and seems to bear a striking physical resemblance to her, especially her strawberry-blond hair.

Other characters include Alice's three best friends, Pamela, Elizabeth and Gwen, her first serious boyfriend, Patrick, her next boyfriend, Sam, her prudish Aunt Sally (who frequently provides a little comic relief), Lester's many girlfriends, and her seventh grade Language Arts teacher, Miss Summers, whom she tries to get her father to marry (with eventual success). The Alice series broaches many topics, including relationships, dating, sex, friendship, life problems, families, God, and understanding.

The books in the long running series include:

Not to be confused with Go Ask Alice, the 1971 novel by Beatrice Sparks.