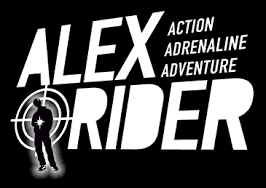 Before Charlie Higson sat down to write the Young Bond books, this was the answer to the question, "What was James Bond like as a kid?"

The series, written by Anthony Horowitz, follows the adventures of Alex Rider, a fourteen-year-old boy who lives in Chelsea who is coerced into working for MI6 after his uncle's death. His uncle, Ian Rider, told him that he worked for a bank but was actually a spy. Alex is looked after by his housekeeper, Jack Starbright, who is American. When Ian dies, MI6 gives Alex a "proposal": either he works for them or Jack is sent straight back to America and Alex goes into a state home.

There have been eleven books in the main series, plus a prequel and a collection of short stories which are both included in the series' numbering:

Although Scorpia Rising was long intended to be the series' Grand Finale, whilst working on a book of short stories set in Alex's universe Horowitz had a change of heart and decided to revive the series with Never Say Die; the short story collection was published in 2019 as Secret Weapon. Another novel, Nightshade, was released the following year, with at least one more book in the series to come (tentatively pencilled in for 2023).

There are also several short stories and extra chapters (many of which were rewritten for inclusion in Secret Weapon):

There are also two supplementary materials, Alex Rider: The Gadgets (featuring blueprints of the gadgets Alex uses), and Alex Rider: Mission Files, featuring assorted in-universe correspondence, diagrams, blueprints and miscellany from the first seven books; and a World Book Day book to mark the 20th anniversary, Undercover: The Classified Files, released in 2020. The books are also being adapted as a series of graphic novels (that reached Ark Angel in 2020) that form a different canon to the books.

Stormbreaker was adapted as a movie in 2006, and despite much mass marketing and merchandise with beliefs that the film would kickstart a franchise, it failed to make its budget back and got unfavourable critical reception. A second attempt at adapting the show for the screen came in the form of a Show of the Books, Alex Rider, which launched in June 2020 with a first series principally adapting Point Blanc; a second series has been commissioned that adapts Eagle Strike.

open/close all folders
The series as a whole
Stormbreaker
Point Blanc
Skeleton Key
Certainly Sarov wouldn’t have been amused. A Western boy about to face death and all he could think about was gum!note Gum that expands when exposed to saliva and can burst anything apart
Eagle Strike
Your father. He and I... We worked together.
Scorpia
Ark Angel
Snakehead
Crocodile Tears
Scorpia Rising
Russian Roulette
Never Say Die
Secret Weapon
Nightshade