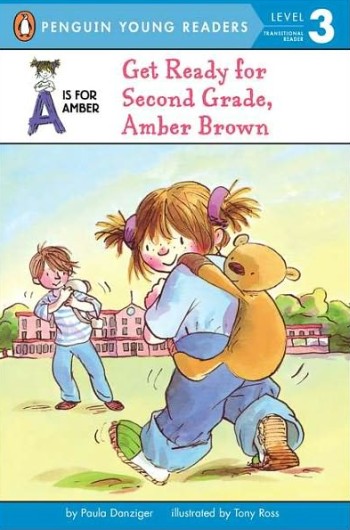 Cover of one of the A is for Amber books
"...one thing I, Amber Brown, have learned in nine and three-quarters years is that things are going to change whether I want them to or not. I didn't really want a new house. I like this one just fine. But Mom and Max bought it anyway. I didn't want a new life. But Mom and Dad divorced anyway. I didn't want a new best friend. But my best friend ever, Justin Daniels, moved anyway. Big changes are a big pain on the brain."
— Amber Brown Is On the Move
Advertisement:

The books focus on the daily life of the titular character, Amber Brown. Amber is a nine-year-old girl who is dealing with a number of tough, realistic problems such as the separation (and later divorce) of her parents, her mother's new boyfriend, and her best friend, Justin Daniels, moving away to Alabama. Despite the often serious nature of the material, the books contain a fair amount of humor and a generally optimistic tone.

Amber was also featured in A is for Amber, a series of early-reader picture books presenting the adventures of a younger Amber and Justin before her parents' divorce and Justin's move.

Danziger passed away in 2004, resulting in the end of the original series. However, in 2012, the series was revived by Bruce Coville and Elizabeth Levy, whom Danziger described prior to her death as "her best friend" and "her other best friend." Their first installment, Amber Brown is Tickled Pink, was released on September 12, 2012, with Tony Ross returning as the illustrator. Their latest installment, Amber Brown Horses Around, was released on September 11, 2014 and illustrated by Anthony Lewis.

In September 2021, it was announced that the franchise had been picked up as a television series for Apple TV+. The series was described as "an unfiltered look at a girl finding her own voice through art and music in the wake of her parents' divorce." The show premiered on July 29, 2022.

open/close all folders
Advertisement:
Amber Brown books
A is for Amber books

The Amber Brown books provide examples of the following: