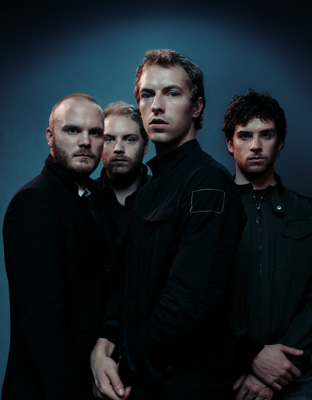 Left to right: Will Champion, Jonny Buckland, Chris Martin and Guy Berryman.
Look at the stars
Look how they shine for you
And everything you do
And it was all yellow.
Advertisement:

Coldplay is an Alternative Rock group from London, and easily one of the biggest bands to come from that genre as well as one of the most popular bands in the world during the 2000s and, by extension, the single most commercially successful band of the 21st century.

After forming in 1996 at university and issuing several low-key releases during the back-end of the '90s, they hit the big time in 2000 with the breakthrough success of their single "Yellow", which would later be included on their debut album, Parachutes. The rest of their oeuvre leading up to the mid-2000s — A Rush of Blood to the Head and X&Y — continued the success, but also gave the band a reputation for their songs sounding too similar (the singles "Speed of Sound" and "Clocks" being frequently singled out for comparison).

Their fourth album, 2008's Viva la Vida or Death and All His Friends, changed this. Produced by Brian Eno, it rewrote the band's fundamentals, introducing experimentation of both the instrumental variety (ex: Ominous Pipe Organ, honky-tonk piano, elaborate string sections) and the arrangement variety (ex: weirder time signatures, unusual song structures). Despite some fan pushback, it was the highest-selling album of the year.

Between The New '10s and now, the band has experimented further by diving into the genres of anthemic electronica (Mylo Xyloto), lush ambient/dream pop (Ghost Stories), upbeat pop rock (A Head Full of Dreams), art pop (Everyday Life), and space pop rock (Music of the Spheres).

The band has also released three Live Albums — Live 2003 (from Sydney), LeftRightLeftRightLeft (2009), which is available for free from their website

Look at the tropes, look how they shine for you...

Now I never meant to do you wrong, that's what I came here to say.
But if I was wrong, then I'm sorry; I don't let it stand in our way.
As my head just aches when I think of the things that I shouldn't have done.
But life is for living, we all know, and I don't wanna live it alone.