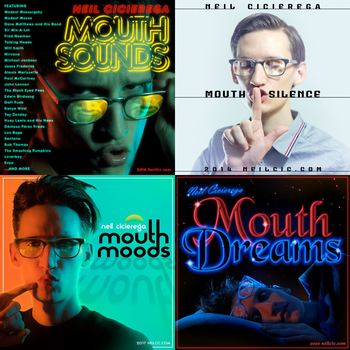 "When I decided to mash up Smash Mouth with John Lennon, of course I was thinking, "This is super blasphemous, this is designed to make people angry." But then by accident, some people think that it actually sounds good. A lot of people tell me that they really like it, when I was expecting that it would make them mad."
— Neil Cicierega, describing his thoughts on creating Mouth Sounds
Advertisement:

The Mouth Albums are a series of remix albums by Neil Cicierega, better known as the lead of Lemon Demon. The albums consist of popular songs from The '60s to The New '10s mixed together in surprising, blasphemous, and usually awesome ways. The project started when Cicierega found a sample pack of stems from the Rock Band series and began to mess around with them in his spare time, which resulted in the track "No Credit Card,"

a heavily remixed version of Huey Lewis and the News' "The Power of Love." After positive feedback from posting this on his Soundcloud, he began to work on what eventually became Mouth Sounds, starting a long line of mashups.

To date, four albums in the series have been released, along with various outtakes and other odds and ends.

Mouth Sounds and Mouth Silence received significant online attention upon their release, and as a result several mashups from the albums have become well-known Internet memes, with Mouth Moods' "Bustin" (a remix of the Ghostbusters theme) arguably being the most famous. The albums are available to download for free on Cicierega's website, and to stream on his Soundcloud. He has also released music videos for some of the series' songs, as well as outtakes from Mouth Moods, on his YouTube channel.

This is the story of the tropes: