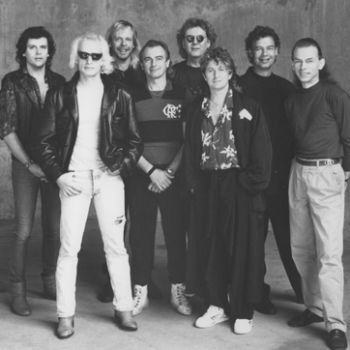 Yes' Union 8-man lineup, circa 1991 (l-r: Trevor Rabin, Tony Kaye, Rick Wakeman, Alan White, Chris Squire, Jon Anderson, Bill Bruford, Steve Howe).note This is the collection of Yes members who were inducted into the Rock and Roll Hall of Fame.
And one peculiar point I see,
As one of many ones of me
As truth is gathered I rearrange,
Inside out, outside in
Jon Anderson, "Perpetual Change," from The Yes Album
Advertisement:

Despite Yes and Time and a Word suffering from mixed reception and Early Installment Weirdness (cover versions, overproduction, orchestras overpowering everything, Peter Banks on guitar), the band's "classic lineup" (Anderson/Howe/Squire/Wakeman/Bruford) and distinctive Progressive Rock sound and look (the latter supplied by the Design Student's Orgasm artwork of Roger Dean) coalesced at the start of The '70s, resulting in the critically acclaimed trilogy of The Yes Album, Fragile, and Close to the Edge, the latter considered their masterpiece. But it didn't last, as they came back to earth with the widely-reviled double album Tales from Topographic Oceans, which was roundly panned for its self-indulgence (although it got to the top of the charts at the time). Notably, Rick Wakeman was so displeased with the album that he left soon afterwards.note (Wakeman has since softened on it, noting that there was a lot of really good material on it, but that it got padded out because there was too much material for a single LP but not enough for a double LP. Fan and critical consensus has since softened as well.) However, the band soldiered on, managing to make two more reasonably well-received albums influenced by jazz fusion, Relayer and Going for the One (the latter getting to number one at the height of punk's popularity) and bringing back Wakeman before once again sabotaging their career with the horribly-received Tormato (although it reached the Top 10 in the Album charts just like Tales from Topographic Oceans did).

After an internal conflict and falling out, Anderson and Wakeman left in 1980, being replaced by vocalist/experienced Record Producer Trevor Horn and keyboardist Geoff Downes of The Buggles. The resulting lineup recorded one album, Drama, which showcased a heavier, harder rock sound than before and earned mixed reception, before disintegrating the next year. note It may be worth noting that Drama and Tormato have undergone similar reappraisals to that of Tales in recent years, with Drama in particular cropping up on a rather large number of "Favourite Yes albums" lists.

The band's former rhythm section of Chris Squire and Alan White soon joined up with South African guitarist Trevor Rabin, whose sensibilities were far more mainstream, and formed a new band called Cinema. Squire also brought back Yes' original keyboard player Tony Kaye and got Trevor Horn to produce the album. During a chance encounter between Anderson and Squire, the former heard Cinema's demos and was so impressed he joined right away, re-singing most of the previously recorded vocals and re-writing some of the lyrics. The resulting album, 90125 (named after its catalog number), was released under the "Yes" moniker and showcased a departure from the band's previous formula, being made up of catchy, accessible poppy hard-rock tunes that still preserved enough of the band's former weirdness like incomprehensible lyrics, complex production, abrupt time changes and multitracked vocal harmonies. The predictable whining from older fans couldn't drown out the critical acclaim, and 90125 became the band's highest-selling album and spawned their biggest-selling single, "Owner of a Lonely Heart". note The band members themselves didn't actually want to release the album as Yes, particularly since Trevor Rabin didn't want to be perceived as replacing Steve Howe, but Executive Meddling insisted.

The follow-up, Big Generator, had reasonable sales and positive reception, but was widely considered inferior to 90125. Anderson, in particular, was so disappointed with it he left Yes to join up with his Close to the Edge-era bandmates to form "Anderson Bruford Wakeman Howe", which released one self-titled album in 1989. As both groups were preparing new material, ABWH's label Arista Records, through some wheeling and dealing, bought out Yes' record contract and name with the intention of improving ABWH's sales by releasing their next album under the Yes name, with contributions from the Rabin/Squire/Kaye/White Yes. The resulting album Union, suffered from severe Executive Meddling and was widely panned. The tour, however, was considered one of their best, with a "Mega-Yes" lineup with eight of the nine members that had recorded more than two albums with the band (Anderson, Squire, Howe, Rabin, Kaye, Wakeman, Bruford, and White; original guitarist Peter Banks was the odd man out). A live recording from this tour is available as Union Live.

After the mixed reception of Talk (the last album with Rabin and Kaye), the band's since returned to their old prog sound, reunited their classic lineup and released the acclaimed Keys to Ascension and Keys to Ascension 2. Various further lineup changes resulted in Open Your Eyes, The Ladder, and Magnification, the former of which earned a mixed reception but the latter two of which have generally been well-received. They were going strong until 2008, when Jon Anderson fell ill. The band soldiered on with Rick Wakeman's son Oliver on keyboards (since booted out so Downes could rejoin) and, most surprisingly, Benoît David of tribute band Close to the Edge on vocals for Fly from Here. However, David was released by the band and replaced by Jon Davison, also from a Yes tribute band for their latest album, Heaven & Earth.

Squire died in 2015 after a short battle with leukemia. In accordance with his wishes, however, the band continued on without him. He was succeeded by Billy Sherwood, who had previously played guitar in the band and had already been filling in on bass during Squire's illness. This marks the first time the band has none of its founding members, while Howe is the only member from the Close to the Edge line-up to currently be a member. Until then, Squire had also been the only member to have been in every lineup of the band, while drummer Alan White was in every lineup from 1972 to his own death in 2022.

In 2017, Anderson, Rabin & Wakeman began performing vintage Yes material with their self-titled band, which was later officially renamed... well, let's just say it wasn't "No"note The official name is "Yes featuring ARW". The band released a live album in 2018 and a new studio album, The Quest, in October of 2021. Anderson has indicated a desire to have some sort of "final Yes event" involving Howe and others; Howe performs on the track "Now and Again" from Anderson's 2019 solo album, so this is not entirely outside the realm of possibility.

Members (founders are in bold):

Former Members (founders are in bold):

Owner of a Lonely Trope:

Despite that, in the second time that verse is brought up in the song, the original lyrics are used."I'll be the roundabout, the tropes will make you out 'n' out"