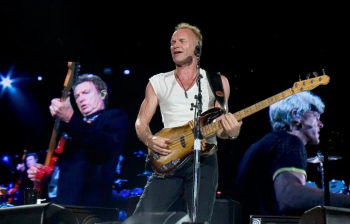 So Nobody Loves the Bassist, eh? Think again. That dude in the spotlight, the one everyone's cheering for, the famous face everybody remembers ... is it me, or is that axe they're wielding suspiciously oversized? VINDICATION! The Lead Bassist takes up an instrument that screams "anonymous role-player," and somehow rides it to fame. For one reason or another, they're better-known than the band's lead guitarist, or even the lead singer.

But what could cause such a perversion of the natural order? There are four fundamental factors that can give birth to a Lead Bassist:

The Virtuoso: This bassist is so famously skilled and so near the top of the field as to overshadow the band's other musicians—who may be excellent in their own right, but not necessarily at the pinnacle.

The Singer: This musician is mainly famous for being a lead vocalist, or part of a Vocal Tag Team. The fact that they play a bass is secondary, and may even go unnoticed by casual fans.

The Face of the Band: This bass player is well known for non-musical reasons, such as:

The Genre Lead: Rather than rock or popular music, this bassist plays jazz, funk, African folk music, etc., genres in which the bass cuts a larger figure—sometimes even a central one.

Bassists may qualify under more than one of these tropes: Paul McCartney, for example, manages to flawlessly embody the first three types.

This is not a list of "Good Bassists" or "Bassists I Like." This page is for bass players who, for one reason or another, garner a distinctly larger share of public notice than more traditional band "frontpeople" such as the singer or lead guitarist. If the bassist is the least-known member of the band, they don't belong here, however well-regarded they are (future musicologists will dub this the "Entwistle-Jones barrier").

Contrast Nobody Loves the Bassist. See also Female Rockers Play Bass (The Singer combines this with Male Band, Female Singer). Sister Trope of Lead Drummer. Does not refer to a bassist made out of lead.