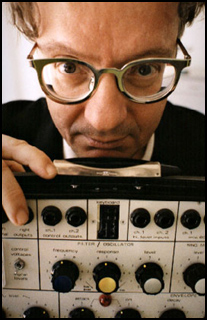 Mark Allen Mothersbaugh (born May 18, 1950) is an American musician, best known for being one of the co-founders of Devo. Besides that, he has a very prolific run as a composer, writing the scores for various television shows (Rugrats, Beakman's World, Sliders), films (Happy Gilmore, Rushmore, The LEGO Movie), video games (The Sims 2, also known for producing the soundtrack to the Crash Bandicoot and Jak and Daxter series), and even commercials (the jingle in the "Get a Mac"/"I'm a Mac and I'm a PC" ads). He's effectively part of Wes Anderson's Production Posse, scoring his first four movies, and is also Phil Lord & Chris Miller's go-to composer.
Advertisement:

He also has a great interest in drawing and painting, with him ending up hosting the drawing segment "Mark's Magic Pictures", on Yo Gabba Gabba!. He art tours regularly, including a show of the hand-painted postcards he sent to friends and family during his years on tour, a series of antique photos mirror-imaged to create the titular "beautiful mutants", and a series of paintings turned into rugs.

Mothersbaugh earned an Academy Award nomination for The LEGO Movie for Best Song ("Everything Is Awesome").

Body of work as composer: