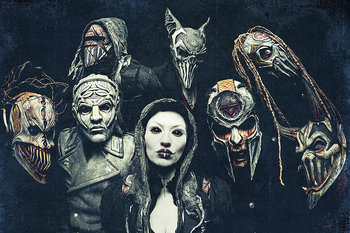 An Alternative/Industrial Metal band from Cleveland, Ohio formed in 1993 in Cleveland Warehouse District. The band was originally established as a side project; to differentiate itself from the members' existing bands and to dispel any misconceptions about the group's sound and musical content, Mushroomhead used costumes, masks, and pseudonyms.

The band's imagery and energetic live shows resulted in both a good relationship with the band GWAR and a feud with Slipknot, which was largely a Fandom Rivalry due to fans perceiving a similarity between the two bands' respective images, and the fact that both bands have a large amount of members (currently eight) to accent an atmospheric style. Sound-wise, however, the two bands couldn't be more different; keyboards play heavily into Mushroomhead's sound.