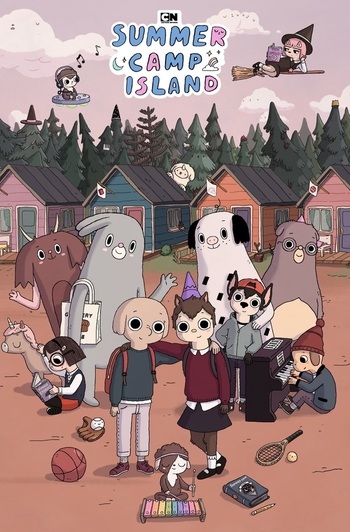 Summer Camp Island is an animated series created by Julia Pott, known for her work as a writer and animator on Adventure Time. The first season season aired on Cartoon Network; the first half premiered all twenty episodes on July 7, 2018 in an all weekend marathon that was simulcast on its sister network, Boomerang, while the second half airing the following June. The series made the jump to HBO Max for its second season, which premiered on June 18, 2020. The show was pulled from the service in August 2022, with additional seasons cancelled despite having already been in production.

The series follows Oscar and his best friend Hedgehog as they experience the several strange occurrences at the summer camp, where horses become unicorns, the counselors are witches, and a variety of monsters appear around the campgrounds.

Vote for your favorite episode HERE

Howard explains the backstory of the Midnight Quittance and why they offer soup every year to Time.

Example of:
Bargain with Heaven

Howard explains the backstory of the Midnight Quittance and why they offer soup every year to Time.