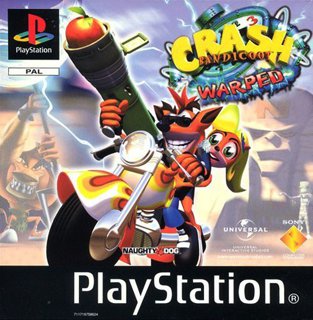 In the aftermath of Crash Bandicoot 2: Cortex Strikes Back, an evil elemental mask named Uka Uka is freed from his underground prison, and is revealed to have been the true mastermind behind Dr. Neo Cortex's schemes. With Crash in possession of all the crystals and gems on Earth, Uka Uka decides to recruit a scientist by the name of N. Tropy to create the Time Twister, a time machine which Cortex and Uka Uka can use to retrieve the crystals from past and future eras. With the help of Uka Uka's counterpart, Aku Aku, Crash and Coco race to the Time Twister to collect the crystals again before Cortex and Uka Uka get a chance to do so.
Advertisement:

Crash Bandicoot 3: Warped is the third installment in the Crash Bandicoot series and the last Crash Platform Game on the Sony Playstation. This game built upon the strengths of the first two games and added more vehicle-based levels (with the player taking control of a bi-plane, bike, jetski or a tiger cub named Pura, at any given time), new abilities that are earned by beating the game's bosses, and a Time Trial mode to keep players coming back to the levels to see how fast they can go. This game also marks the playable debut of Coco Bandicoot, Crash's little sister from the previous game, though most of her levels are vehicle-based.

This game, along with the first game and Cortex Strikes Back, were remastered on the PlayStation 4, Nintendo Switch, Xbox One and PC with updated graphics and new features, as part of the Crash Bandicoot N. Sane Trilogy.