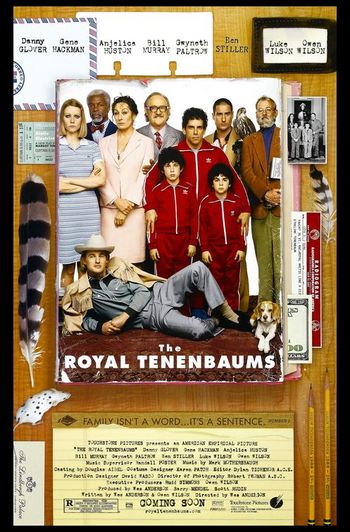 Royal Tenenbaum: You know, Richie, this illness, this closeness to death... it's had a profound affect on me. I feel like a different person, I really do.
Richie Tenenbaum: Dad, you were never dying.
Royal Tenenbaum: But I'm going to live.
Advertisement:

The Royal Tenenbaums is about the Tenenbaum family:

Other important characters include:

The film depicts Royal's attempts at getting closer to his family after failing to pay rent at the Lindbergh Palace Hotel. He fakes stomach cancer to gain their sympathy and access to the family home.

It also functions as a kind of sister movie to Anderson's later project The Life Aquatic with Steve Zissou, which has nearly identical cast and a similar (though much more dreamlike) atmosphere.