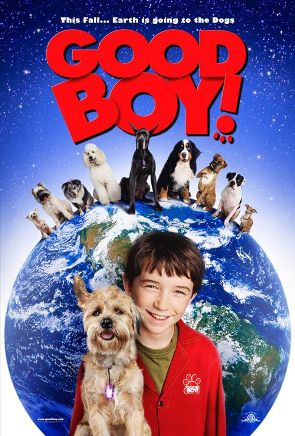 Good Boy! is a 2003 comedy movie directed by John Hoffman and starring Liam Aiken as Owen, a lonely boy who wants a dog.

When Owen's parents agree to let him get a dog after he shows responsibility for walking those of the neighbors, he adopts one that is more than it seems. After watching his new dog, Hubble, sneak off at night, Owen follows him to the remnants of some sort of crash landing site. After a sudden flash of light, Owen wakes up the next morning with the ability to understand dogs. It turns out that Hubble (voiced by Matthew Broderick) is an agent sent from the dog star Sirius 7 to take a look on the long standing process of dogs becoming the dominant species on Earth after they were dropped off centuries ago. With the current state of things, Hubble must prepare a successful illusion for their leader, the Greater Dane, to believe dogs have successfully taken over the world in order for global recall to be avoided.

Notable for having special effects from Jim Henson's Creature Shop.

Not to be confused with the horror game Good Boy.